Hey, everybody. What's going on? It's Preston here from PrestonsCorner.com. Today I've got a very important question that I want to answer, and the question is, should I use a popup on my website? Will I get dinged by Google? What are the benefits? What are the cons? I'll talk about it and I'll answer it in depth right after this. 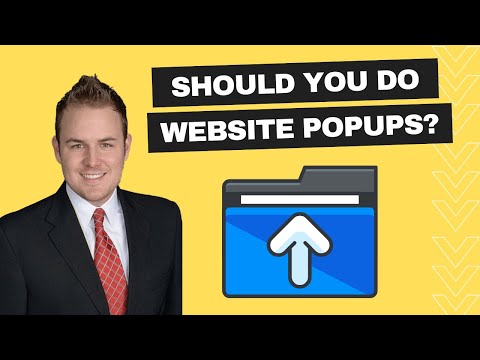 All right. Should you use a popup on your website? Well, if you know anything about SEO, you know that it can ding your website and you can get in trouble by Google. They won't rank you as high. They won't give your site any love if you use a popup. There's different versions of a popup. There's the scroll mat at the top, there's an interstitial ad. There's a bunch of different ways to do it. When I say popup, I mean something that takes over the screen, and not necessarily full width but just a popup. It could be a full size, it could be a little bit smaller. It could be on mobile, it could be on desktop. Google has actually released the guidelines and what they think is a bad user experience. They say anything that's intrusive and hard to get out of is what they say. I'll put the exact language on the screen here. Basically, don't do anything that gives your users a bad experience. You can have a popup, but you can't have one that's spammy, hard to get out of, or anything like that.

As far as conversion rates, and I know that's what a lot of you guys are concerned about here, is do they work? People, are they stupid enough, not necessarily stupid, are they smart enough to realize that this is a popup, I'm out of here? I'm here to tell you that they're not, they're not. I've been using this really cool WordPress plugin, and I'll put a link to it below this video in the summary called Thrive Leads. This is a really slick plugin that lets you do a bunch of different things. It basically helps you build leads and generate leads, capture lead information on your website. It's got a integration point with GetResponse, which is the best email marketing tool. I'll put a link to that below as well. Basically you have email marketing to send out all your emails to your list, and then you've got Thrive Leads on your website, and then when you do a popup on your site, you can have those integrate and capture it, and it'll ad them to your GetResponse list.

Anyway, Thrive Leads, you can do popups. I've done a bunch of these on a bunch of different sites, and I have to tell you guys that I've got some amazing conversion rates doing this. It's not just about having a popup and collecting that lead information. You should really have a track that goes to that subscriber after that and a follow up campaign and all that. As far as popups, they work, they're awesome. Don't be spammy about it. Have a good offer. There's also some psychology you could use in your popup. For example, if you just say, “Hey, put in your email. Fill out this form to get our whitepaper about topic ABC,” it's not going to have as good conversion rates compared to a popup that says, “Would you like to get the whitepaper on [inaudible 00:03:07]?” and one says, “Yes, I'd love to get it,” and the other one says, “No, I love wasting money,” or something like that. You've probably seen these.

You think they're stupid. I didn't know, so I tested a bunch of them. It's crazy what the results are and how good they convert. It's something called the Zeigarnik effect. Basically people click yes, and then they realize it's a gated form, you have to put in your email to get the whitepaper, the ebook, the video course, but they're already invested so they just go ahead and do it anyway. My answer to this question is two thumbs up, popups work. You should be doing them if you have a website. If you have any questions, hey, comment below and I will personally respond. Hey, if you like this video, be sure to comment, like, and subscribe. I'll see you guys next time.

How to Collect Emails on Your WordPress Website
Copy linkBest 4k Video Cameras for 2017
Copy linkGoodbye Canon! Why I'm Switching to Sony Cameras

PrevPreviousShould You Start A Blog in 2020? (Explained)
NextCan You Make Money Podcasting in 2020?Next