In this video blog post I explain why I'm getting rid of my Canon camera and switching to a Sony 4k video camera! I am NOT saying that Sony is better than Canon. I just want to tell you why I'm switching from my Canon to a Sony.

All right, everybody. So it's true. I'm switching from Canon to Sony. Now, I don't spend thousands of dollars on video equipment and camera stuff. A few pieces I will spend that kind of money, if I need to.

For the last few years I've been shooting on my reliable Canon T6i with an external microphone. I have to say I've been really happy with this setup. It's been a great camera. I also do a few other videos for clients, so I do have a teleprompter and some other things here in the studio. This has been a very reliable camera, but since I'm doing more video stuff I've decided to go with a dedicated video camera. I did a video a while back about the Sony lineup of their AX cameras and I decided to jump into the AX33. 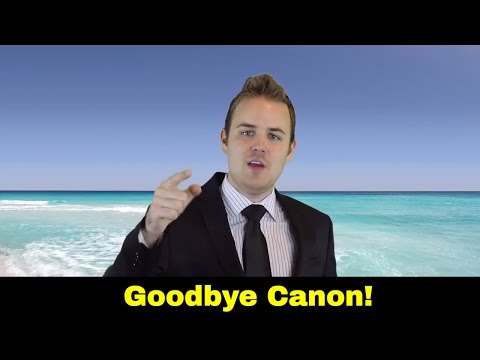 It's funny because it was about the same price as the Canon. The reason I got it honestly is because it has better autofocus, and that was something occasionally I would notice on this camera, where if I tried to wave my hands around, it would start focusing on my hand over here instead of my face.

Right now I'm looking at the monitor here and it's tracked on my face here. I can see the little box on my face. It was really bad when I was waving my hands and it would try to focus on them when I'm trying to reiterate a point or talk about something and go like this.

It was very distracting and annoying in post editing when I was looking at it and I would go, “What is going on? Why is it focusing on that?” And I'd have to do a reshoot. That was one of the worst feelings I've had for a client video. I spent all this time rehearsing, going through the script, and then having to look at it on my computer when I'm in the final cut and go, “Oh my god, I've got to go back.”

So I've switched to Sony. This is probably one of my last few videos here on the Canon. I'm getting rid of it. I know some of you are probably going, “Well what about photography?” Honestly, I don't really do that much photography, but when I did this is a great camera, but the problem is cell phones these days. I thought I had my phone over here but I don't. It's in another room charging. But cell phones these days have gotten so good that it's getting to the point where I've seen other videos of YouTubers taking better pictures with an iPhone than they do with a DSLR that's full frame.

So in my opinion it's not worth it. I'm just going to use my phone for pictures because you can get some really cool stuff out of the iPhones now. It's just not worth it to carry around a whole other camera for photography stuff. But for some of you that love photography and do it all the time, you should definitely keep your Canon or your other DSLR. It doesn't bother me. This is just what I'm doing and I'm just explaining it to you guys here.

The other thing is I wanted a camera that could do 4k and the Sony AX33 came with a 4k option on it. If you put in a high speed memory card then it shoots fantastic 4k. It looks a lot better.

I believe, and a lot of YouTubers as well believe this, that youtube is on smartphones and computers right now, but in the next five to 10 years it's really going to transition to TVs.

Some people are already doing this with things like the Chromecast and Roku and some other … Smart TVs have youtube built in. So I'm a big believer that more people are going to start watching youtube on their TVs. YouTube launched actually YouTube TV. It's kind of blending everything together. So having 4k video content is just going to set you above the competition.

I also think … this is just me guessing here based on past events and what Google/YouTube has said before. Creators who are cranking out content in 4k will get search engine benefits in YouTube and in Google. So all other things being equal, if you have a 4k video and your competitor doesn't, you will be ranked above them and come up higher in the search results.

Now I know that's getting a little bit technical, or maybe you could even say it's a conspiracy, but these things have happened before and you need every single edge you can get online, guys.

So, that's my video. I'm switching to Sony. I don't hate Canon. I just think they've fallen behind on all their cameras and technologies, and they're kind of riding their reputation. Everybody loves Canon, they have great stuff. It works. But they just haven't innovated. And I'm not feeling the love, Canon. If you're watching this, I'm not feeling the love here.

So, that's all. I'm switching to Sony. It's the AX33 and I'm going to keep cranking out videos. I'm just going to keep doing this guys.

If you have anything you want me to do a video about, just post a comment below. I will personally respond to it and crank out a video based on whatever you have questions about. I've got so many awesome projects in the works, guys. I can't talk about a lot of them but they'll be coming up in a future video.

PrevPreviousBest 4k Video Cameras for 2020
NextShould You Start A Blog in 2020? (Explained)Next